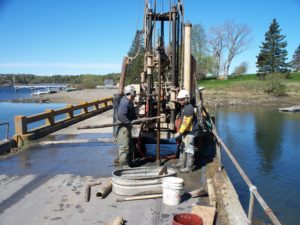 Geotechnical drilling on the old bridge

The team designed and completed the first traditional geosynthetic reinforced soil (GRS) bridge in the State of Maine and thought to be the first in the United States constructed in a tidal environment. The project replaces a structurally deteriorating bridge and restores access and preserves traditional use as a wharf for the town and fisherman working in the waters of Pulpit Harbor.

The bridge was demolished and replaced along the same general alignment in less than six months for under $900K. The use of the GRS bridge application proved to be very successful, reducing construction time and costs even in a tidal environment. The project was named the Engineering Excellence Grand Conceptor Award by ACEC Maine in 2014.

John C., E.I.T. in our Gray, Maine location has moved from Construction Services to our Geotechnical ... END_OF_DOCUMENT_TOKEN_TO_BE_REPLACED