S.W.COLE provided several services for the Broad Street Parkway in Nashua, New Hampshire. The 1.8-mile, two lane roadway begins on Broad Street, approximately 500 feet south of the Everett Turnpike, and travels along Baldwin Street and Fairmount Street. Drivers traveling south then exit the roadway in the heart of the downtown millyard. 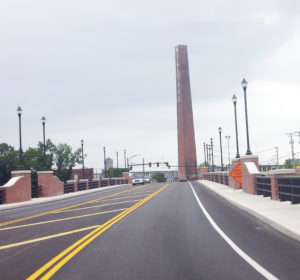 The roadway, planned for decades and under construction for many months, cost $80M to build and is the largest municipally managed project ever constructed in New Hampshire. As the road allows drivers to bypass busy Amherst Street (Route 101A), the goal of the Parkway is to alleviate downtown traffic and attract more business to the millyard area.

S.W.COLE was first contracted by Hayner/Swanson, Inc. in 2013 to perform a wide range of construction materials testing and inspection services for both the roadway and the three associated bridges, including soils, concrete construction, pre-cast concrete fabrication, hot mix asphalt and structural steel fabrication testing and inspection. S.W.COLE also reviewed concrete and hot mix asphalt designs and prepared the Quality Assurance Plan for the project.

In 2014, S.W.COLE was retained by two different contractors to provide global stability analyses on the project’s two retaining walls, to support the contractors’ design submittals.

The Broad Street Parkway opened to traffic in December 2015.

As a company, we pride ourself in a culture that supports employee growth. Today we're featuring a ... END_OF_DOCUMENT_TOKEN_TO_BE_REPLACED