S.W.COLE provided geotechnical engineering services for a then-proposed building for a car dealership addition in southern New Hampshire, in order to obtain subsurface soils information needed to develop geotechnical recommendations for design of foundations and earthwork related to the addition. 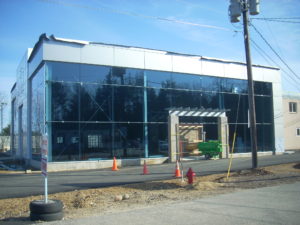 At the time of our geotechnical services, the site was occupied by an existing dealership building in the southern portion with paved driveway and parking to the east and north sides. Development plans called for the construction of a 7,000 square foot building addition, to be placed on the east side of the existing building. A portion of the existing building was razed in favor of the new  car dealership addition, a steel-framed structure with a combination of masonry and metal walls.

S.W.COLE’s subsurface investigation included six test borings and associated laboratory testing, and the preparation of a geotechnical report in which we discussed our findings. In the fall of 2010, S.W.COLE was retained again during the construction phase for construction materials testing, including concrete, soil, masonry and steel testing.

John C., E.I.T. in our Gray, Maine location has moved from Construction Services to our Geotechnical ... END_OF_DOCUMENT_TOKEN_TO_BE_REPLACED