Beginning in 2004, S.W.COLE was retained by Bangor Historic Track, Inc. to perform various services on the then-proposed site of the Hollywood Slots Casino, Hotel and Raceway in Bangor, Maine, which opened in 2008. 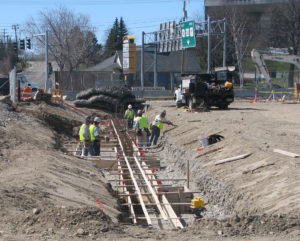 Plans for the site, which was the size of two city blocks, called for the demolition of two hotels, a former gas station and numerous residences and the construction of a 116,000 square foot gaming facility, a four-story pre-cast concrete parking garage, a satellite employee parking lot and a perimeter access drive supported by a retaining wall.

As part of the project, improvements were made to Bangor Raceway so that it could be converted in the future into an off track betting facility. On this stage of the project, S.W.COLE conducted a Phase I environmental site assessment and also provided geotechnical engineering and construction material testing.

S.W.COLE also performed a Phase I environmental site assessment, geotechnical engineering and wetlands delineation for the original proposed location of the gaming facility, which was located on the west site of Main Street in Bangor in Bass Park.

Everything went very well in Southborough. I wanted to say that the crew you had down there was excellent. They were very professional, safe and gave me some insight into the process as well. Please let them know I was very pleased with their work and look forward to working with them again.