Retaining wall at the site of the Intermodal Terminal

S.W.COLE was hired by a retaining wall contractor in 2011 to provide construction materials testing services associated with a large retaining wall, which was to be constructed as part of an intermodal terminal expansion in central Massachusetts. The project increased the square footage of the terminal area and required lateral cuts into an existing slope, which would then be stabilized with two new retaining walls totalling 3,500 linear feet in length. Prior to construction, the construction area included steep slopes that extended downward from a public roadway well above the elevation of the terminal. The slopes ended at the top of an existing cast-in-place concrete retaining wall, which was to be removed during the expansion. The retaining wall contractor was responsible for the design/build of the new retaining walls using the test boring information from an area along a public roadway at the top of the slope, obtained by the owner’s design team. Given the dense glacial till soils found by those test boring explorations, the contractor selected and designed a soil nail wall with a shotcrete facing. 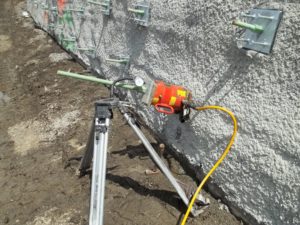 S.W.COLE was retained to provide load testing on a representative number of soil nails. When these load tests showed failing results at levels well below the targeted strength, the contractor decided to retain S.W.COLE to assess the composition and strength of the soils in the wall reinforced zone with additional test borings. While our test borings found soils with a gradation that was similar to the native glacial till encountered during the owner’s geotechnical investigation, the soils encountered in our exploration contained various debris and were loose and saturated.  We surmised that the soil encountered in our test borings was fill located in a zone between the existing slope/road and the back of the retaining wall.

S.W.COLE’s findings prompted a more closely spaced exploration program along the proposed retaining wall alignment and laboratory triaxial shear testing to determine the strength of the fill soils. As a result of our explorations and testing, the retaining wall contractor designed the installation of additional soil nails with lower capacity and also included longer and higher capacity soil tie-back anchors.

S.W.COLE’s services and prompt response for unforeseen additional services allowed the project construction to progress during the designer’s additional evaluation, reducing the impact on the aggressive construction schedule.

Bates had a very short time frame to test the existing base materials below our field hockey artificial turf before replacement. A call to S.W.COLE provided a quick response, expert testing and analysis of the material.