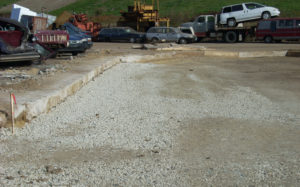 The project involved the re-construction and addition of PCC pavement. S.W.COLE performed subsurface explorations at the site (including test borings) and developed design plans for new PCC pavement. The client wanted to utilize reclaimed aggregate base materials from reclaimed bituminous pavements, and S.W.COLE performed blend analyses and made recommendations for optimum reclaim depths to generate an acceptable new product.

S.W.COLE was also retained during construction to provide geotechnical field personnel to observe soil subgrade preparation for pavement and structure areas. We sampled recycled and imported aggregate base materials for laboratory and field testing for gradation and compaction and provided field and laboratory testing of the concrete used to construct the PCC pavement.

John C., E.I.T. in our Gray, Maine location has moved from Construction Services to our Geotechnical ... END_OF_DOCUMENT_TOKEN_TO_BE_REPLACED