Drilling near an overhead transmission line on the NEEWS project

S.W.COLE was retained by Power Engineers in 2012 to provide subsurface explorations and geotechnical engineering for this proposed National Grid electrical transmission project. The project included construction of 345 kV electrical lines along existing transmission line corridors and upgrading the Millbury 3 Substation in Millbury, MA and the Sherman Road Substation in Burrillville, RI.  The general alignment spanned about 38 miles through the towns of Millbury, Sutton, Northbridge, Uxbridge, Millville, MA and North Smithfield and Burrillville, RI.  Our work included 80 test borings and 57 test probes along the transmission line corridor and at substation expansions. 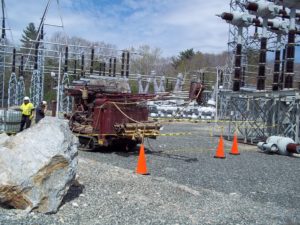 Drilling at a substation on the NEEWS project

Given the length of the alignment, varying surficial terrain and features made access to the project sites difficult. Access was limited by steep terrain, wetlands, subsurface gas pipelines and right-of-way abutters. S.W.COLE’s scope of work for the project required extensive pre-planning and coordination with the project team and stakeholders. Prior to mobilization to the site, pre-planning involved ground reconnaissance for access for drilling equipment and safety and environmental training. Access through wetlands and over pipelines was accomplished by contracting with a timber matting company to place temporary protective matting for hundreds of feet to numerous exploration locations. Weekly forecasts of our drilling locations were required to be reported to the project’s public relations personnel for providing project abutters the required 20 day notice before nearby explorations began. Environmental compliance involved protection of wetlands and surface water, containment of drilling wash fluid and use of biodegradable hydraulic fluids in the drilling equipment.

The exploration work on this project was accomplished in two phases, spanning from April to July 2012 and October to December 2012. Project progress and coordination was managed by S.W.COLE via weekly teleconferences with personnel from Power Engineers, National Grid, environmental consultants and pipeline personnel.

We contracted with S.W. Cole Engineering, Inc. for all of the specified testing in our new school project. The team was prompt in responding to all of our needs. They helped us meet required deadlines on time. The knowledge of the team that performed on site, also helped when test results were not positive for the project. They assisted in strategies to rectify and retest with the Project’s best interest in mind. The site engineers managed time effectively, and would group visits in the schedule and work with the contractors to avoid additional trips which helped keep our costs to a minimum. I would encourage everyone to contract with S.W. Cole Engineering, Inc. for their testing needs.