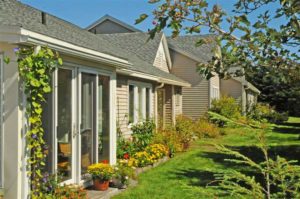 S.W.COLE provided specialized construction materials testing and fire stopping inspection services for the owner on several phases of the renovation of Kendal at Hanover, a Continuing Care Retirement Community, in Hanover, New Hampshire. We were first retained in 2013 as the owner was beginning to repair delaminating concrete on the structural columns of one of the facility’s parking garages. After speaking to the owner about the needs of the project, S.W.COLE designed a customized testing plan, which included impact echo testing on the concrete columns, concrete testing during placement of new concrete and soils testing of fill and backfill materials.

During renovations to the facility building’s laundry room, corridors and common area in late 2015 and early 2016, S.W.COLE was retained to review contractor submitted UL fire stopping designs and/or supplier engineering judgments for appropriate use. Destructive testing of fire stopping systems were performed and documented, and reports were sent to both the owner and building inspector.

In 2016, S.W.COLE was retained again by the owner to perform impact echo testing on the columns at the ambulance entry and reception canopy areas, to assess delamination damage. S.W.COLE also performed concrete and soils testing during the repair of the columns.

Bates had a very short time frame to test the existing base materials below our field hockey artificial turf before replacement. A call to S.W.COLE provided a quick response, expert testing and analysis of the material.

Thank you, our Clients and Vendors After the year that it's been, we're grateful and excited to be ... END_OF_DOCUMENT_TOKEN_TO_BE_REPLACED