In 2004, after a study to investigate the condition of secondary schools in South Portland, Maine, the South Portland School District (SPSD) began the process of creating plans for the $47M renovation of South Portland High School (SPHS). Development plans called for the construction of a new one and three-story, steel-framed addition connecting the school building, gymnasium and performing arts wing. To make way for this addition, the project included demolition of two wings of the school. The plans for the new school also included a daylighted basement level as well as new paved areas, athletic fields and stormwater management areas. 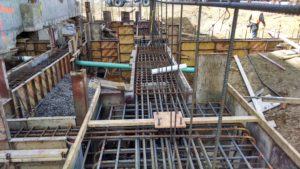 S.W.COLE has worked on SPHS in various forms since 2006, when the firm was retained by Harriman Associates, Inc. (http://harriman.com/) to provide preliminary geotechnical engineering services for the proposed additions and renovations to the SPHS building and grounds. The purpose of our services at this time was to obtain subsurface information to be used to develop geotechnical recommendations for preliminary design of foundations and sitework associated with the proposed construction.

Also in 2006, S.W.COLE was retained by Harriman to complete a structural condition survey to make observations and document portions of structural components, particularly at proposed building addition interfaces and within existing building areas to be renovated.

In 2007, when the basement level of the former school flooded after heavy rains, Harriman retained S.W.COLE to explore the subsurface conditions adjacent to the school in order to assess  soil, groundwater and underdrain conditions. S.W.COLE found that the existing foundation underdrain was likely damaged and recommended that it be replaced, and in 2008, when improvements were made to the drainage system, S.W.COLE provided associated construction materials testing.

In 2010, S.W.COLE was retained by SPSD to provide design phase geotechnical engineering, to support the design and development of construction documents. At this time, we performed seven additional test borings within the proposed building addition footprint and two test pits within the stormwater management basin areas, as well as provided soils laboratory testing.

In 2011, working directly for SPSD, S.W.COLE performed a Phase 1 environmental site assessment (ESA) to evaluate current and historical conditions at the project site and on adjoining properties in an eff ort to identify recognized environmental conditions (RECs) and business environmental risks (BER). The results of the Phase I ESA provided evidence concerning the presence of both RECs and BERs, and based on these results, we recommended remedial work prior to and during demolition activities.

S.W.COLE was retained in 2012 to provide construction materials testing and special inspections during the construction of the project. The project was completed in January 2015.

S.W. Cole has issued a statement due to the COVID-19 Pandemic. Please view our new policies and ... END_OF_DOCUMENT_TOKEN_TO_BE_REPLACED