S.W.COLE has a long relationship with Wentworth-Douglass Hospital in Dover, New Hampshire. S.W.COLE has been retained to work on numerous projects, including a central utility plant, a four-story in-patient bed tower addition (which included the state-of-the-art Women and Children’s Center) and a six-story parking structure, in the last 15 years. 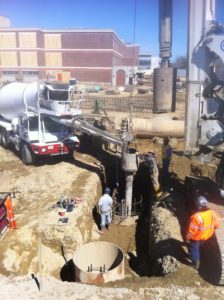 One of many projects at Wentworth-Douglass

In 2003, work on the six-level parking garage began. The project consisted of a pre-cast parking garage addition with a footprint of 51,000 sf adjacent to an existing parking garage. The garage was designed to include six levels of parking. In the summer of 2006, the first three levels were constructed. The project also included an elevated helipad structure and pedestrian bridge. The garage addition and helipad are supported on approximately 90 drilled concrete piers ranging in diameter from three to six feet. Deep foundations allowed for future vertical expansion of three additional levels, which began construction in early 2011.

The firm was also retained in 2009 to perform explorations, geotechnical engineering services, construction materials testing and Special Inspections for the four-story in-patient bed tower. The 26,000 square foot plan area building is located in the southwest portion of the hospital campus and included the hospital’s highly anticipated Women and Children’s Center. S.W.COLE found that subsurface conditions varied greatly, and as such, the building is supported on about 100 drilled concrete piers ranging in diameter from three to six feet.

Always thinking of your firm and your services — and the great job S.W.COLE did in Rowley, MA on my bridges.