Nearly four decades after its founding in 1979, S.W.COLE has offices across New England.

An S.W.COLE concrete cylinder drop off box from the early years.

Laying the Groundwork for Success

Over four decades after its founding in 1979, S.W.COLE continues to learn from its history and operate on the values and practices of its founder, Stephen W. Cole.

Steve and his wife Wendy started the firm after the company for which he was working, Jordan Gorrill Associates (JGA), closed its Presque Isle and Bangor offices.

S.W.COLE opened its first office, at 2001 Hammond Street in Hermon, Maine, just outside Bangor. Steve worked on projects such as the former Superior Paper warehouse on the Bangor waterfront and new Burger King restaurants throughout Maine before deciding it was time to expand the team. The firm started to grow, and Steve was joined by several former JGA colleagues to start. 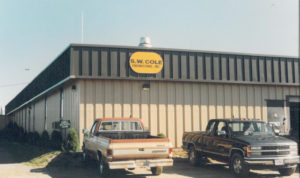 A historical photograph of the Bangor office.

While each employee had expertise in their respective disciplines, everyone pitched in where needed. It wasn’t uncommon for any of S.W.COLE’s employees to be found running laboratory tests in the evenings or weekends to get the job done. Steve established a culture from the beginning that emphasized hard work, responsiveness to clients, ethics and practical solutions.

The groundwork laid by Steve has proven to be very successful for the firm, which now has offices across New England and services projects all over the region and beyond. Several acquisitions have expanded our reach and allowed S.W.COLE to gain footing with new clients and, in some cases, new geographies. The firm employs approximately 120 people and works on more than 2,500 projects a year.

Your quick response and and quality service is invaluable to the success of the project. We have worked with your offices in Maine quite a bit and are glad to know that the excellent service we receive is company-wide.

S.W.COLE has expanded our capabilities to better serve our clients. We offer Alkali Silica Reaction ... END_OF_DOCUMENT_TOKEN_TO_BE_REPLACED